It is our pleasure to announce that Professor Oscar Gandy has won the 2016 Surveillance Studies Network Outstanding Achievement Award.  He was given the award in a ceremony during the 7th Surveillance & Society conference, held in Barcelona 21st to 23rd April 2016. After receiving the honour,  he delivered a keynote on “Surveillance and the public sphere”. 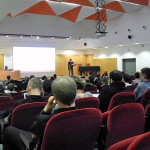 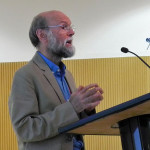 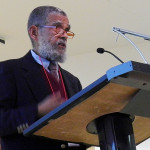 David Lyon on Oscar Gandy in his citation during the ceremony:

Without a doubt, Oscar Gandy is a great pioneer of surveillance studies, in daring to sketch out a new research area, insisting on the imperative of empirical analysis, in showing that surveillance is a social justice issue and arguing that something can be done. Let me say something about each.

First, Gandy took a lead in examining a fresh field of study, based in communication studies and focusing on the development of computer-based classifications of consumers within the rapidly growing practices of marketing. He demonstrated how surveillance of consumers was no less consequential than that of workers or citizens and that this could be empirically substantiated. Investigative journalists such as Erik Larson were also active. Larson produced a documentary (We know where you live) and a book (The Naked Consumer, 1992) but the first, and seminal, social science research was done by Oscar. We now discover, from scholars such as Josh Lauer, the C19th and C20th roots of consumer surveillance and this has extended our understanding of the panoptic sort. But Oscar set the ball rolling.

Second, throughout his work, Oscar has shown a strong and exemplary commitment to empirical inquiry with the use of a novel and important range of methodologies characterizing his work. This has inspired many others working in the field, including some of my own PhD students. Some work directly in the field of consumer surveillance – such as with loyalty programs – whereas others have applied Gandy’s work to different but cognate fields – such as credit scoring in post-Apartheid South Africa. While the panoptic retains its Foucaldian significance for disciplinary practices, for Gandy, it’s the political economy of information that supplies the crucial, critical stance that raises the profile of socio-economic position as a means of shaping life-chances and choices.

Third, Oscar’s work clearly links surveillance with social justice issues, of access to resources and fairness of distribution. He traces the uneven impacts of surveillance to the social location of its subjects and how they are sorted. This is seen most clearly in terms that are now basic to the surveillance studies lexicon, such as “cumulative disadvantage” (to which one might well add today, “intersectional” disadvantage). Such phrases, along with “rational discrimination” that is “cumulative disadvantage’s” supposedly neutral enabling practice, capture in meaningful and memorable concepts the explanatory keys of Gandy’s scholarly work in the area. And they also offer a strong springboard into policy analysis and proposals – which is where Oscar’s work also makes an impact.